WePower
Price USD
$0.010
Price BTC
0.00000100
Market Cap
$5,954,749
24h Change
-0.77%
Tip the author Translate Rate
Night mode
A
A
Team&Founders Report
Summary:
Тhe team of one of the most famous ICOs out there is composed of Baltic nationals with prior experience in green tech companies.

WePower aims to increase the adoption of renewable energy through the creation of a tokenized platform for power project developers to raise capital. The tokens issued by energy producers represent the energy they commit to produce and deliver in the future.

As Nikolaj Martyniuk, co-founder and CEO of the company explained, he and his fellow co-founder and investments adviser, Artūras Asakavičius, started WePower as a way to combat the problems that currently exist in the green energy market. They have seen that support from governments towards driving renewable energy development has been slowing down. Nikolaj believes that the reason for this could be that governments want to phase out of tariff support, which was previously dominantly present in those markets. According to him, the green energy market is moving forward, however, financing from banks has been significantly reduced. Therefore, the goal of WePower is to promote renewable energy by allowing anyone to participate directly in the energy market.

The WePower ICO model allows for energy producers to trade directly with the green energy buyers (consumers and investors) and raise capital by selling energy upfront, at below-market rates. The tokenization model developed by the WePower ICO allows for wider access to capital by private projects, by broadening the scope of potential investors to literally anyone who can purchase tokens.

It is important to note that WePower is officially supported by the Lithuanian Government, as can be seen in the letter from the Ministry of Energy of the Republic of Lithuania, attached at the end of WePower’s whitepaper.

Moreover, WePower seems to be in good relations with the Estonian Government as well, since, at the end of Septemeber 2017, it signed a memorandum of understanding with the Estonian national transmission operator, Elering. The two parties aim to convert energy data into blockchain on a national scale and to develop models for more effective integration for distributed green energy with the grid. According to WePower’s whitepaper, a pilot project will be launched in April 2018.

Currently, there are 25 people behind the WePower project, according to the company’s website, a good part of them coming from the Baltic States. After studying the team behind WePower - co-founders, employees and advisors - it can be said that it includes people with diverse backgrounds: energy experts, engineers and developers, as well as people with experience in the crypto world and cyber security. Details about the team’s members can be found below.

He has 10 years of experience working in the energy sector, ranging from plant construction to energy sales through independent energy suppliers. Moreover, Nikolaj was involved in the energy import/export between countries. He is now responsible for the overall strategy and business development for WePower. His background is mostly related to the energy sector. However, in 2017 he signed up for a course in Bitcoin and Cryptocurrency Technologies at Princenton University and a course in Private Equity and Venture Capital at Bocconi University.

Artūras has a background in regulation and Fintech. For the past 5 years, he led a team of lawyers, responsible for fintech, blockchain, and cryptocurrency related businesses and regulation at the biggest law firm in the Baltics - Sorainen. Arturas is currently focused on investor relations and legal aspects of the WePower project. He is also chairman of the Lithuanian Fintech Association – a national association which unites financial and technology companies in Lithuania.

Kaspar was previously the CTO of Elektrilevi, Estonia’s largest DSO, and has worked on the green energy integration and Smart Grids challenge for 7 years. He was responsible for development and execution of the DSO strategic plan, and their Smart Grid technology roadmap as well as the management of the overall Information Technology and Operational Technology enterprise architecture. Kaspar is also a speaker at European conferences regarding energy systems digitalization, specializing in building and implementing big data analytics systems and smart meters.

All three members mentioned above, Nikolaj Martyniuk, Artūras Asakavičius and Kaspar Kaarlep are rather young, having finished their university studies in 2007, 2014 and 2012. By all means, age is just a number, but still, in many cases experience is what makes the difference between failure and success. Fortunately, they surrounded themselves by people with complementary skills (for e.g. in crypto and cyber security) who also bring a lot of valued experience. Details about them can be found below.

Eyal, with more than 20 years of experience, is another seasoned entrepreneur who is supporting WePower. Years ago, he founded MetaCafe, Israel’s fastest growing video sharing site, reaching over 50m uniques at its peak and Contact Networks, one of the first social networks in 1998. He has recently founded Bancor Protocol, which enables the creation of smart tokens on the Ethereum blockchain. Smart tokens have the advantage of providing their own liquidity and price discovery, without needing to be listed on an exchange.

David A. Cohen is the founder and Chairman of Dcntral, a blockchain-based Cybersecurity company. Moreover, he is an advisor of several Blockchain and Cryptocurrency organizations: Hashgraph - Wireline.io - WePower - FarmaTrust - Patron – Money Token - A+ Payments – SmartMesh. David is a former member of the IOTA Foundation and was a member during the IOTA Token Cryptocurrency launch which broke all previous records reaching a $1.7 Billion market cap on the very first day of trading. Additionally, he was the founder and CEO of Infotility – a SaaS solution deployed globally for Utility Distribution Automation, Automated Demand Response, Microgrids, SmartGrid and Smart Building applications. The company was successfully sold to Pacific Controls in Dubai. Years ago, he co-founded Silicon Energy, a developer and seller of Internet-based energy technology software that enables enterprises to reduce energy costs and related expenditures. The company was acquired by Itron in 2003, for $ 71.2 million.

David Drake is Founder and Chairman at LDJ Capital, a multi-family office which deals in various funds worldwide with over $1.5 trillion in assets. LDJ Special Situations partners have invested $100 Million in Alibaba & Palantir. More recently, David got involved in numerous cryptocurrency projects, being a board advisor for The Naga ICO, CoinMe, ICOBox and BLOCKv.

Australia energy program manager/ Energy advisor Trevor has extensive experience with SaaS/PaaS cloud and professional services companies, particularly in B2B / Enterprise markets. He was the Managing Director, Australasia, at TIBCO Software, a Silicon Valley startup, which listed on NASDAQ in 2004, and designed the first wholesale energy software trading system in Australia during this time. Moreover, he also has over 15 years of angel investing experience with numerous exits, including two ASX listings.

WePower gets its message across efficiently. One of those responsible for this success is Geoffrey, an international storyteller, marketing & communications professional based in the South of France. With over 20 years of experience working with B to B and consumer brands, he helps companies who want to do business at an international level achieve their goals.

Profiles for some of the other WePower collaborators can be found in the table below: 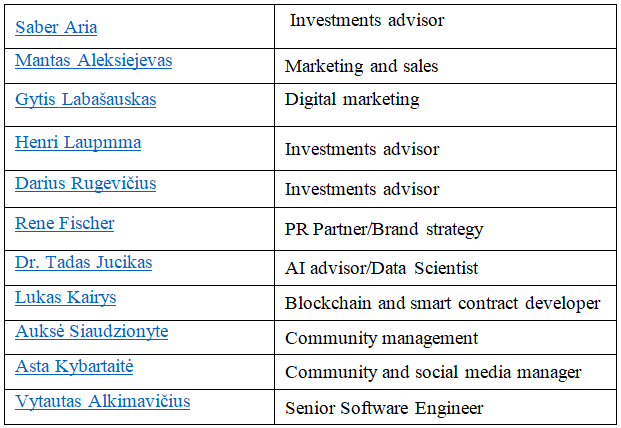 WePower has a rather aggressive marketing campaign which seems to bring results. The company is visibly present on social media, having thousands of followers on Facebook, Twitter and Telegram. Moreover, WePower seems to easily get its message across.

On Youtube, WePower has a strong presence as well. There are several Ask Me Anything sessions, interviews and presentation videos where WePower representatives are open and consistent with their answers. Moreover, the project has attracted generally positive attention from the viewers.

The WePower white-paper has a few typos and is written in a rather dull manner, but it is clearly presenting what one might want to know about the company.

WePower recently raised $40 Million from the 22,933 contributors during its ICO – the largest ICO in the green energy space.

During its presale, WePower raised $30 million, $11 million of which came from a public presale round in October of 2017 and $19 million from strategic investors and funds. Some of the committed partners and investors from the presale include: Galaxy Investment Partners (investment firm focused on digital assets and blockchain technology), Science Incubator (US successful incubator), AlgoLedge (investments company focused on blockchain technology ventures), Connect Capital (Blockchain and digital assets investment fund), and Everblue Capital (Boutique investment bank).

Although the big ICO success, one should be very aware that this hype could quickly disappear. The project is yet to develop a strong infrastructure and penetrate the market which is highly unlikely in the long-term. There are a lot of possibilities for speculation and when Bitcoin goes on a strong bullish move, we could easily see WePower following this trend. Closely follow the news and market movements if you are investing long-term. All ICOs at the moment are extremely high-risk investments.

There are many initiatives around the world now, trying to make the environment a little bit greener. WePower’s objective of promoting renewable energy is in line with today’s trends.

Moreover, the company’s representatives have a strong presence online and are willing to answer one’s questions. The firm’s huge ICO success further testifies the strengths of the team behind WePower and its capabilities to execute and successfully deliver a project. Although some of its core members lack experience in the crypto world, the important thing is that they were smart and open to bring near them experienced professionals, with complementary backgrounds.

Overall, I consider the project has potential to become a successful one long term.

Ripple historical evolution: from the decentralization dream to building for banks (XRP)
Execution analysis
To this day, XRP represents practically the only opportunity for end users to invest in a bank chain. This trumps the fact that Ripple has evolved to be increasingly hostile to use
bank-chain decentralization

Flaviu Dumitrascu
Published reports
5
Member since
06.02.2018
Flaviu Dumitrascu has no shares of this digital assets. Please read our Disclaimer and understand that this is not an investment advice..
Options
Translate Tip the author Download Report
Share
Are you sure you want to permanently delete this report?
This will remove your report from our servers and users will not be able to see it or apply